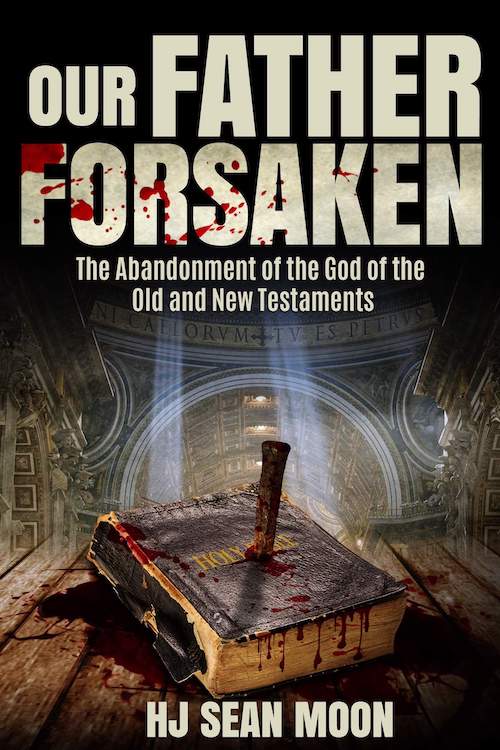 "Our Father Forsaken is an explosive, hold-no-prisoners, shot across the bow in a growing battle to reclaim family, faith and freedom in the 21st century."

Have a Promotional Code? Order on Rod of Iron MInistries

Fresh after the success of Rod of Iron Kingdom, Sean Moon's formidable biblical defense of the 2nd Amendment, in Our Father Forsaken, he explores the historical erosion of faith that has culminated in today's cultural onslaught against the eternal values that made us a Godly nation. Sean Moon takes lethal aim at the dark philosophical forces which have been supplanting biblical, moral imperatives with an ever-astonishing parade of horribles demanded by the fierce egalitarianism of our time. Our Father Forsaken is an explosive, hold-no-prisoners, shot across the bow in a growing battle to reclaim family, faith and freedom in the 21st century.

In a day and age of Biblical compromise, Pastor Sean brings a sharp edge to issues that many others avoid.

No matter what religion you are, if you're an American, the Pastor is your man!

Excellent read. This book offers verifiable historical documents substantiating humanity's journey from being created in the image of a divine Creator to creating a god in *it’s* own image and liking. I highly recommend it to anyone interested in truth.

In the book Our Father Forsaken, author Sean Moon breaks down many of the ancient heresies in a way that equips the body of Christ to avoid and overcome the great deception that occurs in the last days. As we move closer to the release of the spirit of the Antichrist, this book provides some powerful tools in order to strengthen the faith of the saints. The Bible encourages us to understand the devices of the enemy, and I think that this book does just that. This is a must read for anyone that wants to exercise dominion power over the end times "great deception" that the Bible warns us of.

Insightful and a good read!

John “TIG” Tiegen,
Benghazi hero and co-author of 13 Hours: The Inside Account of What Really Happened in Benghazi.

Sean Moon presents a timely work that is sorely needed at a pivotal moment in our world. Our Father Forsaken offers a frank, biblically based reminder of why our society will fall into chaos and lawlessness if we continue to ignore the principles found in God’s Word, and follow the deceptions found in man’s folly.

Mark Keith Robinson
"I am the Majority"

This book causes you to ask why, and keep asking why. Knowledge of facts and history is power. This is a powerful book!

Our Father Forsaken proves "Satan has never told a new lie" is the most true statement ever made.  The historical evidence prosecutes the case against all modern heresies. This book is a must read for any serious believer and should be required reading for anyone seeking ordination to the pastorate.

Selection from  CHAPTER ONE: THE FIRST HERETIC

Marcion explained the Old Testament in its literal sense and rejected every allegorical interpretation. He recognized it as the revelation of the creator of the world and the god of the Jews, but placed it, just on that account, in sharpest contrast to the Gospel. He demonstrated the contradictions between the Old Testament and the Gospel in a voluminous work (TheAntithesis). In the god of the former book he saw a being whose character was stern justice, and therefore anger, contentiousness and unmercifulness. The law which rules nature and man appeared to him toaccord with the characteristics of this god and the kind of law revealed by him, and therefore it seemed credible to him that this god is the creator and lord of the world (kosmokratos). As the law which governs the world is inflexible, and yet, on the other hand, full of contradictions, just and again brutal, and as the law of the Old Testament exhibits the same features, so the god of creation was to Marcion a being who united in himself the whole gradations of attributes from justice to malevolence, from obstinacy to inconsistency.
‍
—Adolf Von Harnack, History of Dogma, Volume I

Fifty years after the death of St. Paul, a charismatic preacher named Marcion appeared in Rome to proclaim the “hidden” meaning of the teachings ofJesus. His interpretation relied heavily upon the mystery religions that had spread throughout the Roman Empire during the early Christian era and the teachings of the Neo-Platonists. It centered on the concept of gnosis—the knowledge required for a soul to transcend the confines of matter.

According to Marcion, the exacting and wrathful deity of the OldTestament, whom he called the “Demiurge,” was not the God of the NewTestament. Jesus, he insisted, bore witness to the unknown Supreme Being of Acts 17:23. 1 This higher God was a Being of pure light, the giver of eternity, anda fount of infinite mercy and goodness.

To establish his case, Marcion pointed to contradictions between the Oldand New Testaments. Joshua, he argued, had the sun stopped in its tracks in order to prolong a battle against the Hebrew people, while Christ, through St.Paul, said: “Let not the sun go down on your wrath.” Elisha had commanded bears to attack children, while Jesus said: “Let the little children come unto me.”The Demiurge demanded an eye for an eye, and a tooth for a tooth,” while Jesus said: “Do not resist an evil person. If someone strikes you on the right cheek, turn to him the other also.” 2

Surely, Marcion maintained, there is a cleft between the two testaments that cannot be breached. Since the God of Jesus is a God of pure light and perfect love, the entire Old Testament, which sanctions violence for the defense of home and hearth, must be discarded from the Christian canon....

Norms that were accepted as common sense even ten years ago are increasingly against the law in the United States and other Western nations. To have traditional values regarding marriage and the existence of two biological sexes, or parental rights and responsibilities to oversee the upbringing and education of children, exposes adults to ostracism, professional disbarment, loss of employment, and even imprisonment.

If this massive social experiment continues, people of faith will have to choose whether to obey the State or to obey their conscience, regardless of the consequences. One would expect that the Christian community at large would be prepared to stand up and demand that their rights of religious freedom not be violated, but non-Biblical beliefs are widespread even among active Christians.

THE REVOCATION OF RIGHTS
As discussed in Chapter 10, government–enforced transgenderism is just the latest episode in the imposition of a post-Christian, Gnostic religion on the population. It is authoritarian because it has to be, since nature and common sense oppose it. Its dictates have not been chosen by popular vote, but enforced by unconstitutional edicts from unelected judges and leftist bureaucrats in the U.S. Departments of Education and of Health and Human Services, with the support of angry LGBTQ mobs who will shame and intimidate those who dare to challenge their claims. Ultimately, its dictates are backed by the power of government to imprison and even to use lethal force.

Since the founders of America knew that government has the potential to misuse its authority and power, they enshrined the right to own lethal firearms in the Second Amendment to the Constitution. Thomas Jefferson, in a December 20, 1787 letter to James Madison, said that the purpose of civilian arms was to be a check on government. He wrote, "What country can preserve its liberties if their rulers are not warned from time to time that their people preserve the spirit of resistance. Let them take arms."

But that right is increasingly under attack. In November, 2018, in Fernadale, Maryland, Gary Willis, a 61-year-old man was shot and killed by an officer trying to enforce the state’s “red flag” law which allows the confiscation of firearms from gun owners who have not been convicted of any crime or lost their right by any due process. The “red flag” protective orders may be sought by family members, police, or others when the gun owner is perceived to be a danger to themselves or others. Willis’ niece, Michelle Willis, said her uncle “likes to speak his mind. I’m just dumbfounded right now. My uncle wouldn’t hurt anybody.” Apparently, being outspoken in one’s political views in the presence of family members or others can lead to confiscation of one’s firearms, without a diagnosis or due process.

Nearly two thousand years ago, the early Christians in Rome under the rule of Emperor Nero were martyred because of their unpopular beliefs. As described by the Roman historian Tacitus: “They were torn by dogs and perished, or were nailed to crosses, or were doomed to the flames and burnt, to serve as a nightly illumination, when daylight had expired.” If people of faith in America are intimidated into acquiescence, then where will persecuted Christians and members of other minority faiths find support and refuge? If the state continues to drive the acknowledgement of God and the practice of biblical Christianity from the public square, Christians will be faced with a choice, to be absorbed into the secular culture or to stand firm and suffer the consequences.

An anemic Christianity that rejects the God of the Old and New Testament while embracing an air-brushed, feminized Jesus is no match for the aggressive, militant atheism of our age, which leads to the torture and persecution of millions of Christians in Communist countries like North Korea and China, not to mention attacks by Islamists murdering thousands of Christians worshipping peacefully in their pews.

Watching silently, while tens of thousands of fellow believers are tortured or massacred, is not an act of love; it is an act of cowardice. As during the times of Nehemiah, Christians are called to rebuild vibrant communities of faith with one hand, and a weapon ready to use, if needed, in the other. It is time for followers of Christ to be brave again.

8 Dawn Amenn, “Persecuted and Forgotten? 2015-2017: A Report on Christians Oppressed for their Faith 2015-17” Executive Summary, Aid to the Church in Need, Brooklyn, NY, https://www.churchinneed.org/persecution/